Z Is for Moose (Library Binding) 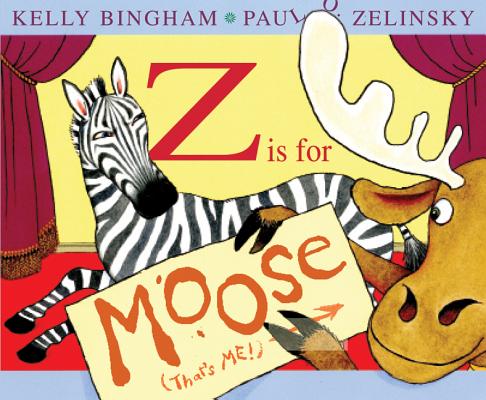 “A hilarious alphabet story unlike any other! Poor Moose just wants to be a part of the alphabet, but when he pops up as the letter D, Zebra has to put Moose back in his proper place in line. When Moose gets to the letter M only to find a mouse in his place, he's heartbroken! A wacky story turns into a sweet tale of friendship and makes a great read-aloud for storytime or for anyone just looking to belong!”
— Amanda Snow, Hooray for Books!, Alexandria, VA

Caldecott Medalist Paul O. Zelinsky illustrates Kelly Bingham's outrageously funny, critically acclaimed, and boundary-breaking story about a moose, a zebra, and the alphabet! Zebra wants to put on a show as simple as ABC, but Zebra's friend Moose has other (unexpected and hilarious) ideas!

Zebra thinks the alphabet should be simple. A is for Apple. B is for Ball. Easy! But his friend Moose is too excited to wait his turn, and when M isn't for Moose (Mouse gets the honor), the rest of the letters better run for cover.

Exuberant and zany storytelling brings to life two friends and one laugh-out-loud comedy of errors that's about friendship, sharing, and compromise.

The incomparable Paul O. Zelinsky's artwork is bursting at the seams—literally—with child appeal. Breaking the borders of the page, and creating the art both digitally and traditionally, Zelinsky turns convention on its head. The result is a picture book that is innovative, hilarious, and begging to be read over and over again.

Z Is for Moose will bring laughter and fun to every story time and alphabet lesson, whether in school or at home.

Named a Notable Book for Children by the American Library Association

Kelly Bingham has been a storyboard artist, story supervisor, and director and is now a writer. Shark Girl, her first novel, was named a Best Book for Young Adults by the American Library Association. Its sequel is Formerly Shark Girl. Kelly Bingham lives with her husband Marty and four children in the town of Ellijay, Georgia.

Paul O. Zelinsky is the illustrator of Anne Isaac's Dust Devil and creator of the now-classic interactive book called The Wheels on the Bus. His retelling of Rapunzel was awarded the 1998 Caldecott Medal. Rumpelstitlskin, Hansel and Gretel and Swamp Angel with different authors all garnered Paul a Caldecott Honor. Since 1991 Paul O. Zelinsky has lived in the same apartment with his wife Deborah in northern Brooklyn, New York.

“Everybody will be elated with this goofy new way of going from A to Z.”
— Bulletin of the Center for Children’s Books (starred review)

“This laugh-out-loud romp of an abecedary features an impatient moose who just can’t wait for his turn.”
— Booklist (starred review)

“If you think you’ve seen every possible idea for an alphabet book played out, think again.”
— Horn Book (starred review)

“Readers accustomed to the usual list of letters will be giggling with suspense by the time ‘L is for Lollipop’ rolls around.”
— Publishers Weekly (starred review)

“Hilarious mayhem. . . . The familiar ABC has never been more fun.”
— The Guardian