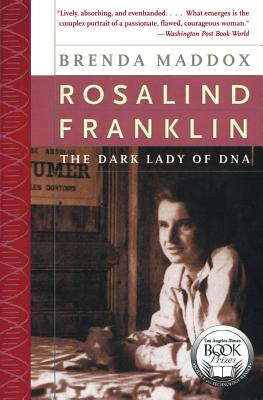 In 1962, Maurice Wilkins, Francis Crick, and James Watson received the Nobel Prize, but it was Rosalind Franklin's data and photographs of DNA that led to their discovery.

Brenda Maddox tells a powerful story of a remarkably single-minded, forthright, and tempestuous young woman who, at the age of fifteen, decided she was going to be a scientist, but who was airbrushed out of the greatest scientific discovery of the twentieth century.

Brenda Maddox is an award-winning biographer whose work has been translated into ten languages. Nora: A Biography of Nora Joyce, won the Los Angeles Times Book Prize for Biography, the Silver PEN Award, and the French Prix du Mailleur Livre Etranger. Her life of D. H. Lawrence won the Whitbread Biography Award in 1974, and Yeats's Ghosts, on the married life of W. B. Yeats, was shortlisted for the Samuel Johnson Prize in 1998. She has been Home Affairs Editor for the Economist, has served as chairman of the Association of British Science Writers and is a member of the Royal Society's Science and Society Committee. She lives in London and Mid-Wales.

“Maddox does justice to her subject as only the best biographers can.”
— Los Angeles Times Book Review

“Lively, absorbing and even handed … What emerges is the complex portrait of a passionate, flawed, courageous women.”
— Washington Post Book World

“A sensitive, sympathetic look at a women whose life was greater than the sum if its parts.”
— New York Times Book Review

“An excellent biography … Maddox’s account of Franklin’s last years and premature death is moving and poignant.”
— Women's Review of Books

“In this sympathetic biography, Maddox …illuminates her subject as a gifted scientist and a complex woman.”
— Publishers Weekly

“A gripping yet nuanced account … a magnificent biography.”
— The Independent

“A joy to read.”
— Sunday Telegraph

“A meticulous biography…[Rosalind Franklin] was the unacknowledged heroine of DNA, the Sylvia Plath of molecular biology.”
— The Economist

“A vivid three-dimensional portrait of a sciencetist and human being … a moving biography.”
— Daily Telegraph (London)