The Company They Keep: How Partisan Divisions Came to the Supreme Court (Paperback) 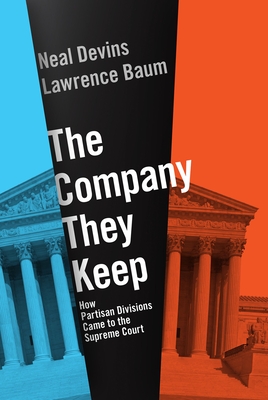 Are Supreme Court justices swayed by the political environment that surrounds them? Most people think yes, and they point to the influence of the general public and the other branches of government on the Court. It is not that simple, however. As the eminent law and politics scholars Neal Devins and Lawrence Baum show in The Company They Keep, justices today are reacting far more to subtle social forces in their own elite legal world than to pressure from the other branches of government or mass public opinion. In particular, the authors draw from social psychology research to show why Justices are apt to follow the lead of the elite social networks that they are a part of. The evidence is strong: Justices take cues primarily from the people who are closest to them and whose approval they care most about: political, social, and professional elites. In an era of strong partisan polarization, elite social networks are largely bifurcated by partisan and ideological loyalties, and the Justices reflect that division. The result is a Court in which the Justices' ideological stances reflect the dominant views in the appointing president's party. Justices such as Clarence Thomas and Ruth Bader Ginsburg live largely in a milieu populated by like-minded elites. Today's partisanship on the Court also stems from the emergence of conservative legal networks such as the Federalist Society, that reinforce the conservative leanings of Republican appointees. For the Warren and Burger Courts, elite social networks were dominated by liberal elites and not divided by political party or ideology. A fascinating examination of the factors that shape decision-making, The Company They Keep will reshape our understanding of how political polarization occurs on the contemporary Supreme Court.

Neal Devins is Sandra Day O'Connor Professor of Law and Professor of Government at the College of William and Mary. He is the author of numerous books and articles discussing the intersection of law and politics, including The Democratic Constitution (Oxford 2015, 2nd edition) and articles in the Yale, Stanford, Columbia, Chicago, Michigan, Pennsylvania, Virginia, and California law reviews. He has also written opinion pieces for Slate, The Washington Post, The New York Times, and The Wall Street Journal. Lawrence Baum is Professor Emeritus of Political Science at Ohio State University. He is the author of several books on judicial decision making and other topics, including Ideology in the Supreme Court (Princeton 2017), The Battle for the Court (Virginia 2017), and Judges and Their Audiences (Princeton 2006). He has published articles on a range of subjects in journals in political science and law.