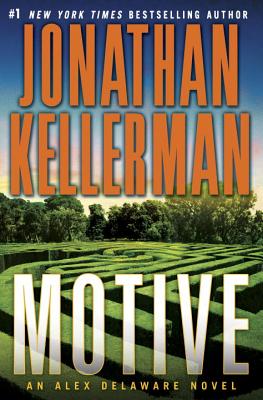 This is book number 30 in the Alex Delaware series.

"NEW YORK TIMES "BESTSELLER
Jonathan Kellerman writes razor-sharp novels that cut to the quick. Now comes "Motive, " which pits psychologist Alex Delaware and homicide cop Milo Sturgis against a vicious criminal mind the kind only Kellerman can bring to chilling life.
Even having hundreds of closed cases to his credit can t keep LAPD police lieutenant Milo Sturgis from agonizing over the crimes that don t get solved and the victims who go without justice. Victims like Katherine Hennepin, a young woman strangled and stabbed in her home. A single suspect with a solid alibi leads to a dead end one even Alex Delaware's expert insight can t explain. The only thing to do is move on to the next murder case because there's always a next one.
This time the victim is Ursula Corey: a successful, attractive divorcee who's been gunned down not a robbery but an execution, a crime that smacks of simple, savage revenge. And along with that theoretical motive come two strong contenders for the role of perp: the dead woman's business partner/ex-husband and her divorce lawyer/secret lover. But just as Alex and Milo think they re zeroing in on the most likely suspect, a bizarre new clue stirs up eerie echoes of the unsolved Hennepin murder. And the discovery of yet another crime scene bearing the same taunting signature raises the specter of a serial killer on a mission, whose twisted method is exceeded only by his manipulative and cunning madness.
Praise for "Motive"
""
Jonathan Kellerman has mastered the art of lean, evocative prose in] a series that grows stronger with each volume. " New York Journal of Books"
One of Kellerman s] best works to date . . . "Motive" is wonderfully made, equally well-driven by plot and character, and shouldn t be missed. "Bookreporter"
"Motive"] will even keep genre veterans guessing. . . . The twists are both shocking and logical, and the byplay between the leads entertaining. " Publishers Weekly"
Praise for Jonathan Kellerman
Jonathan Kellerman's psychology skills and dark imagination are a potent literary mix. " Los Angeles Times"
""
A master of the psychological thriller. " People"
""
The combination of Alex Delaware and] Detective Milo Sturgis . . . makes for the most original whodunit duo since Watson and Holmes. " Forbes.

Jonathan Kellerman is the #1 "New York Times" bestselling author of more than three dozen bestselling crime novels, including the Alex Delaware series, "The Butcher s Theater, Billy Straight, The Conspiracy Club, " "Twisted, "and" True Detectives." With his wife, bestselling novelist Faye Kellerman, he co-authored "Double Homicide "and" Capital Crimes." With his son, bestselling novelist Jesse Kellerman, he co-authored the first book of a new series, "The Golem of Hollywood." He is also the author of two children s books and numerous nonfiction works, including "Savage Spawn: Reflections on Violent Children "and" With Strings Attached: The Art and Beauty of Vintage Guitars." He has won the Goldwyn, Edgar, and Anthony awards and has been nominated for a Shamus Award. Jonathan and Faye Kellerman live in California, New Mexico, and New York."