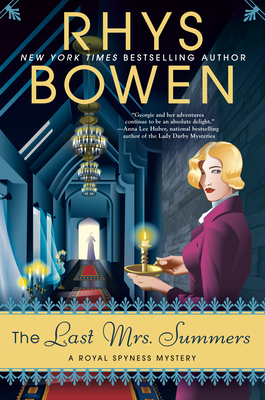 This is book number 14 in the A Royal Spyness Mystery series.

Georgie is just back from her honeymoon with Darcy when a friend in need pulls her into a du Maurier-like murder in this all-new installment in the New York Times bestselling Royal Spyness series from Rhys Bowen!

Georgie's best friend, Belinda, inherits a spooky old house in Cornwall and asks Georgie to go with her to inspect the property. When they arrive, they meet Rose, a woman Belinda knew as a child when she spent her summers with her grandmother in Cornwall. Belinda never liked Rose, who has always been bossy and a bit of a bully, but when Belinda's house proves to be uninhabitable, Rose invites them to stay with her.

Rose is now married to Tony Summers, Belinda's childhood crush, and lives in the lovely house on the cliffs that he has inherited. Rose confides that she thinks Tony killed his first wife and now she is afraid. She asks Georgie and Belinda to observe Tony's behavior and their surroundings. Is Rose imagining things? Is Tony dangerous? In their quest for answers, they encounter a creepy housekeeper, Mrs. Manners, and learn that some kind of forgotten tragedy occurred on the property years ago involving them all.

There is a lot of strange to go around and things only get weirder--and deadlier--when one night a member of the household is found dead. All clues point to Belinda as the prime suspect. Now Georgie must uncover some long buried secrets that may prove the victim was really a villain before Belinda takes the fall for the murder.

Rhys Bowen, a New York Times bestselling author, has been nominated for every major award in mystery writing, including the Edgar®, and has won many, including both the Agatha and Anthony awards. She is also the author of the Molly Murphy Mysteries, set in turn-of-the-century New York, and the Constable Evans Mysteries, set in Wales as well as two internationally bestselling stand alone novels. She was born in England and now divides her time between Northern California and Arizona.