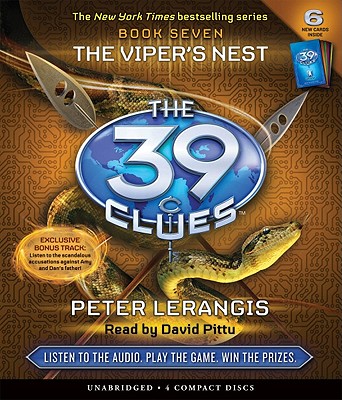 This is book number 7 in the The 39 Clues series.

The most dangerous secret in Amy and Dan's past is unveiled in Book 7 of the #1 New York Times bestselling series.FORMAT: 4 CDs, UnabridgedNARRATOR: David PittuThe hunt for 39 hidden Clues that lead to an unimaginable power have taken a heavy toll on fourteen-year-old Amy Cahill and her younger brother, Dan. They've just seen a woman die. They're wanted by the Indonesian police. They're trapped on an island with a man who knows too much about the death of their parents. And a tropical storm is rolling in. Just when they think it can't get any worse, it does. Because the Cahills have one more rattling skeleton for Amy and Dan to discover . . . the terrible truth about their family branch.

Peter Lerangis is the author of The Sword Thief and The Viper's Nest, Books 3 and 7 in the bestselling multi-media adventure series The 39 Clues. He has written more than 150 books for young readers in many different genres. He's also a Broadway musical theater actor/singer, a marathon runner, and a father of two sons. He currently lives in New York City.