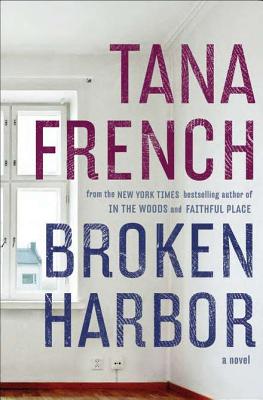 By Tana French
Email or call for price.
Out of Print

“I keep wondering how long Tana French will be able to keep up the quality of her mesmerizing Dublin detective series, but they just keep getting better! In Broken Harbor, Mick 'Scorcher' Kennedy, the hardline murder detective who made his first appearance in Faithful Place, takes the starring role. A father and his two children are murdered and their mother is in the hospital, gravely injured. What happened in their almost abandoned luxury housing development? Ghosts of both the present and the past haunt the investigation in this atmospheric procedural.”
— Susan Taylor, Book House of Stuyvesant Plaza, Albany, NY

Mick "Scorcher" Kennedy, the brash cop from Tana French's bestselling "Faithful Place," plays by the book and plays hard. That's what's made him the Murder squad's top detective and that's what puts the biggest case of the year into his hands.

On one of the half-built, half-abandoned "luxury" developments that litter Ireland, Patrick Spain and his two young children are dead. His wife, Jenny, is in intensive care.

At first, Scorcher and his rookie partner, Richie, think it's going to be an easy solve. But too many small things can t be explained. The half dozen baby monitors, their cameras pointing at holes smashed in the Spains walls. The files erased from the Spains computer. The story Jenny told her sister about a shadowy intruder who was slipping past all the locks.

And Broken Harbor holds memories for Scorcher. Seeing the case on the news sends his sister Dina off the rails again, and she's resurrecting something that Scorcher thought he had tightly under control: what happened to their family one summer at Broken Harbor, back when they were children.

With her signature blend of police procedural and psychological thriller, French's new novel goes full throttle with a heinous crime, creating her most complicated detective character and her best book yet.

Tana French grew up in Ireland, Italy, the US and Malawi, and has lived in Dublin since 1990. She trained as a professional actress at Trinity College, Dublin, and has worked in theatre, film and voiceover. she is the author of "Faithful Place," "The Likeness," and "In the Woods," which won Edgar, Anthony, Macavity, and Barry awards for first novel. She lives in Dublin with her husband and daughter.

"One of the most talented crime writers alive."

“Ms. French created haunting, damaged characters who have been hit hard by some cataclysm . . . This may sound like a routine police procedural. But like Gillian Flynn’s Gone Girl, this summer’s other dagger-sharp display of mind games, Broken Harbor is something more.”

“So much of the pleasure inherent in reading these novels is in trying to figure out where things are going and being constantly surprised, not to mention thoroughly spooked. I predict Broken Harbor will be on more than one Best of 2012 lists — it’s definitely at the top of mine.”

"Broken Harbor is truly a book for, and of, our broken times. It's literature masquerading as a police procedural."

“French has that procedural pro's knack for making mundane police work seem fascinating. And she's drawn not just to the who but also to the why — those bigger mysteries about the human weaknesses that drive somebody to such inhuman brutality. What really gives Broken Harbor its nerve-rattling force is her [French’s] exploration of events leading up to the murders, rendered just as vividly as the detectives' scramble to solve them."

“These four novels have instated Ms. French as one of crime fiction’s reigning grand dames — a Celtic tigress . . . It’s not the fashion in literary fiction these days to address such things as the psychological devastation that a fallout of the middle class can wreak on those who have never known anything else, and Ms. French does it with aplomb — and a headless sparrow and dozens of infrared baby monitors."

“The fourth book in Tana French’s brilliant, genre-busting series about the (fictitious) Dublin Murder Squad . . . Invoking atmosphere is one of French’s particular gifts, and in this department, Broken Harbor (the name of the town before the developers got hold of it) is a tour de force.”

“Ms. French has come to be regarded as one of the most distinct and exciting new voices in crime writing. She constructs her plots in a dreamlike, meandering fashion that seems at odds with genre's fixed narrative conventions. Sometimes, it's not even clear whodunit. Her novels have been translated into 31 languages, with 1.5 million copies in print . . .  Broken Harbor has the hallmarks of a standard police procedural: a cocky homicide detective with a troubled past who educates his younger partner with pat lessons; a shocking crime that seems to defy explanation; a heart-stopping twist at the end. But Ms. French undercuts expectations at every turn. The victims begin to look less like victims; the case starts to unravel and the lead detective makes compromises that could ruin him.”

“Both the characters and the crime command attention, page by page.”

“French's flair for setting and its influence on characters, as well as her elegant prose, shine in Broken Harbor. The emptiness of Brianstown becomes the modern equivalent of the spooky mansion, complete with things that go bump in the night . . . French expertly shows the importance of connecting with each other, and how fragile those bonds can be.”

"Salon.com’s Laura Miller has this advice for anyone who has not yet read EVERY Tana French novel, 'Just go out and get them right now.'”

“French’s eloquently slow-burning fourth Dublin murder squad novel shows her at the top of her game . . . As usual, French excels at drawing out complex character dynamics.”

“Each of French’s novels (Faithful Place, 2010) offers wonderfully complex and fully realized characters . . . French has never been less than very good, but Broken Harbor is a spellbinder.”

“A mystery that is perfectly in tune with the times . . . [French] continues to distinguish herself with this fourth novel, marked by psychological acuteness and thematic depth . . . There are complications, deliberations and a riveting resolution.”