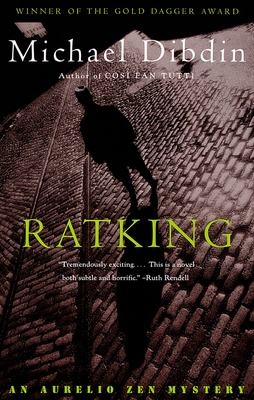 By Michael Dibdin
Email or call for price.
Special Order - Subject to Availability

This is book number 1 in the Aurelio Zen Mystery Series series.

Winner of the Crime Writers Association Gold Dagger Award, this chilling police procedural is a masterpiece of psychological suspense.

Italian Police Commissioner Aurelio Zen is dispatched to investigate the kidnapping of Ruggiero Miletti, a powerful Perugian industrialist. But nobody much wants Zen to succeed: not the local authorities, who view him as an interloper, and certainly not Miletti's children, who seem content to let the head of the family languish in the hands of his abductors--if he's still alive. Was Miletti truly the victim of professionals?  Or might his kidnapper be someone closer to home: his preening son Daniele, with his million-lire wardrobe and his profitable drug business?  His daughter, Cinzia, whose vapid beauty conceals a devastating secret? The perverse Silvio, or the eldest son Pietro, the unscrupulous fixer who manipulates the plots of others for his own ends? As Zen tries to unravel this rat's nest of family intrigue and official complicity, Michael Dibdin gives us one of his most accomplished thrillers.

Michael Dibdin was born in England and raised in Northern Ireland. He attended Sussex University and the University of Alberta in Canada. He spent five years in Perugia, Italy, where he taught English at the local university. He went on to live in Oxford, England and Seattle, Washington. He was the author of eighteen novels, eleven of them in the popular Aurelio Zen series, including Ratking, which won the Crime Writers’ Association Gold Dagger, and Cabal, which was awarded the French Grand Prix du Roman Policier. His work has been translated into eighteen languages. He died in 2007.