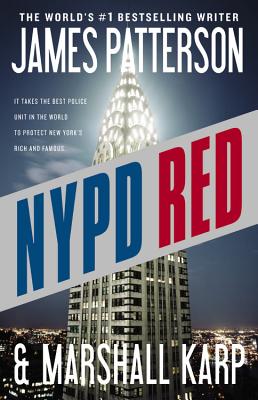 This is book number 1 in the NYPD Red series.

On the opening night of New York's biggest Hollywood event, special task force NYPD Red is on high alert -- and they can't afford to make a single mistake.
NYPD Red is a special task force charged with protecting the interests of Manhattan's wealthiest and most powerful citizens. When a world-famous movie producer is poisoned on the first day of a Manhattan film festival called Hollywood on the Hudson, they are the first ones called. Then an actor is killed on the set of a film. And a Molotov cocktail explodes at a movie premiere.
Detective First Grade Zach Jordan and his new partner-and ex-girlfriend-Detective Kylie MacDonald are assigned to the case. The killer has every murder, every escape, planned down to the last detail-and he's scripted an explosive finale that will bring New York and Hollywood to its knees. With larger-than-life action, relentless speed, and white-knuckle twists, NYPD Red is a mega-blockbuster from "The Man Who Can't Miss." (Time).

"I can't believe how good Patterson is, whether he's doing a Washington police yarn or traveling a different road with a female narrator. He is always on the mark. I have never begun a Patterson book and been able to put it down."—Larry King, USA Today,

"You just can't beat James Patterson when it comes to suspense. He's the king...make that the emperor of contemporary suspense fiction."
—Rebeccareads.com

"Patterson boils a scene down to the single, telling detail, the element that defines a character or moves the plot along. It's what fires off the movie projector in the reader's mind."
—Michael Connelly