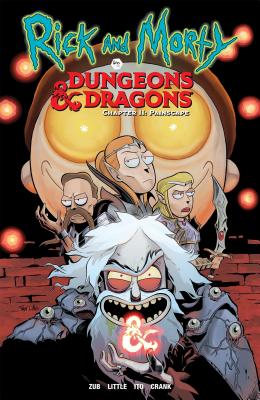 In Rick and Morty vs. Dungeons & Dragons, the pop culture juggernaut and the best-selling role-playing game team up once again in an all-new companion story!

Once upon a game, Rick, Morty and the Smith family went on magical D&D adventures…now, magical D&D adventures are coming to Earth, and no one will survive the Painscape! The world’s greatest role-playing game returns to plague the world’s most dysfunctional animated family! Fan-favorite dice dependent Jim Zub (Samurai Jack, Savage Sword of Conan) re-teams up with Eisner-nominated cartoonist +5 Troy Little (Fear and Loathing in Las Vegas, The Powerpuff Girls) to destroy Adult Swim’s pop culture juggernaut and the best-selling role-playing game that once used the term “THAC0.”

Jim Zub is a writer, artist and art instructor based in Toronto, Canada. Over the past twenty years he’s worked for a diverse array of publishing, movie and video game clients including Marvel, DC Comics, Disney, Capcom, Hasbro, Cartoon Network, and Bandai-Namco. He juggles his time between being a freelance comic writer and a professor teaching drawing and storytelling courses in Seneca College’s award-winning Animation program. His current comic projects include Conan the Barbarian, the monthly adventures of Robert E. Howard’s legendary sword & sorcery hero, Dungeons & Dragons, the official comic series of the world’s most popular tabletop role-playing game, and Stone Star, a space-fantasy adventure set inside a roving gladiatorial arena.

"Rick and Morty vs. Dungeons & Dragons is a perfect synthesis of the best parts of both worlds."
— ComicBook.com