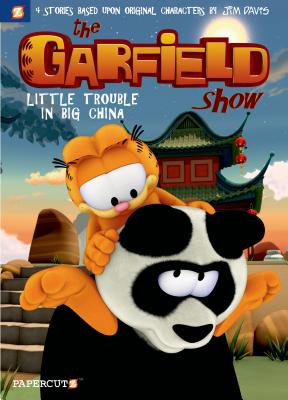 This is book number 4 in the The Garfield Show series.

When Garfield attempts to ship Nermal and Odie to a far-off corner of the world, he ends up stranding all three of them in China! When Jon comes to rescue his pets, all four of them get tangled in a race for ancient treasure. Get ready for the most epic GARFIELD SHOW adventure yet!

JIM DAVIS is the creator of Garfield, named by Guinness World Records as "The Most Widely Syndicated Comic Strip in the World." Jim spent started his cartooning career as an assistant to Tumbleweeds creator, Tom Ryan. After years of honing his skills and studying the comics pages closely, he noticed there were a lot of successful strips about dogs, but none about cats! Garfield, a fat, lazy, lasagna-loving, cynical cat was born. The strip debuted in 1978 in 41 U.S. newspapers. Today, it is read in 2,570 newspapers by 263,000,000 readers around the globe. Jim Davis has had many successes with Garfield including four Emmy Awards for Outstanding Animated Program and induction into the Licensing Hall of Fame (1998), but his most prized awards are from his peers in the National Cartoonist Society: Best Humor Strip (1981 and 1985), the Elzie Segar Award (1990), and the coveted Reuben Award (1990) for overall excellence in cartooning.

“These books are a librarian and parents' dream.” —COMICS BULLETIN

“My kids like the cartoon fine, but they really liked the comics.” —COMICS IN THE CLASSROOM

“The stories are entertaining and have that sense of humor that have kept the strips popular all these years.” —SCHOOL LIBRARY JOURNAL