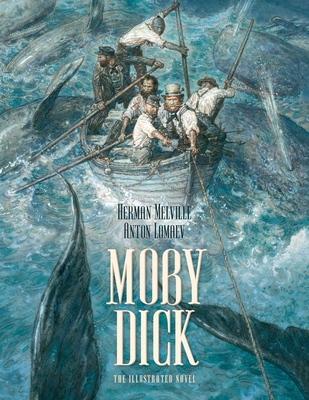 Perhaps the greatest of all American novels, Moby Dick is newly presented with sixty inspiring full-page illustrations that bring fresh life and emotional depth to this classic of literature.

Every reader knows the obsessive story of Captain Ahab and the famous white whale. Moby Dick is the great American novel, a monument of literature.

Based on the events depicted in the “Narrative of the Most Extraordinary and Distressing Shipwreck of the Whale-Ship Essex” and the legend of “Mocha Dick," it is the story of the wandering sailor Ishmael and his voyage aboard the whaling ship the Pequod. Commanded by the obsessed Captain Ahab, a man who is hell-bent on revenge against a white whale of incredible ferocity, the Pequod and its crew are tasked with this singular goal, whatever the emotional or human cost. It is a novel rich with symbolism and complex themes.

But this mythical adventure has never been portrayed in such a powerful way and with such striking illustrations, presenting a new perspective on this cornerstone of American literature. It marks a wonderful entry point for new readers to discover Melville's universe—and a beautiful edition for the countless dedicated readers of this unique novel.

Born in Manhattan in 1819, Herman Melville went to sea when he was twenty years old. His adventures around the globe inspired his classic novel Moby Dick, among many others. Returning from his adventures in 1847, he settled into a stable family life from in Massachusetts and then in New York. He died at age seventy-two, completely forgotten, but his work was rediscovered in the 1920s. His complex and ambitious work is now studied and translated throughout the world.

Anton Lomaev was born in Vitebsk, Belarus. He is a member of the prestigious union of Russian painters. Lomaev has published several illustrated novels, including the famous Redwall series by Brian Jacques. He is member of the Academy of Fine Arts in St Petersburg, Russia, where he lives.