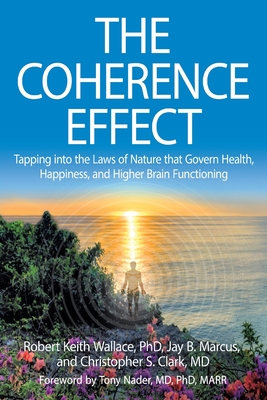 What keeps one person healthy while another gets sick on a regular basis? What allows one person to see solutions that others miss, or to have a perpetually sunny disposition?

The Coherence Effect's profound insights about these questions have led to feature articles adapted from the book appearing in leading journals in the first weeks of the book's publication. Articles by the authors have been published in Yoga Digest ("Are You a Terrible Meditator and What You Can Do About It"), Spirituality & Health ("Increase Ojas to Strengthen the Immune System"), Oracle magazine ("What is Life?"), Medicina (on neuroadaptability), and Thrive Global ("The Coherence Effect").

What then allows for optimal functioning? Fortunately, it's not just based on genetics and is something that can be developed. The Coherence Effect: Tapping into the Laws of Nature that Govern Health, Happiness, and Higher Brain Functioning shows that the key to health, clear thinking, and even happiness is the coherent or orderly functioning of the brain and body. Like cars or anything with moving parts, brains and bodies simply run better when all the parts are functioning in a coherent or orderly manner.

The book also covers diet and lifestyle changes that support brain-body coherence. Those with problems of anxiety, insomnia, and constipation, for example, are benefited by foods, herbs, and spices that are different from those who are prone to anger issues, skin eruptions, hyperacidity and other inflammatory disorders, and also different from those with weight issues, aching joints, depression, congestion, and asthma. The book provides detailed diet guidelines for each disorder from Maharishi Ayurveda (a modern revival of the ancient health science of Ayurveda). It also includes easy lifestyle changes for optimal health, including a daily routine that has been followed by accomplished Yogis and sages throughout time, which is tailored to life in the modern world.

Western medicine uses pharmaceuticals to target symptoms or specific disorders, which may relieve our discomfort, but don't typically remedy the underlying cause. And they aren't enough to keep Americans healthy when 40% of the population has chronic (largely incurable) diseases.

The Coherence Effect shows that for lasting health and high performance we need to apply order-generating principles to what really keeps the body healthy-to what we eat, how we digest our food, getting good sleep, and our meditation, exercise, and Yoga programs. Whether a program brings a deep inner order or coherence should be the criterion for all health advice. The book shows that programs that effectively heal and prevent disease do so because they generate coherence at a deep level of the physiology.

The book is by Chris Clark, MD (Yale Medical School), a psychiatrist first trained in the mid-1980s in the health principles of Ayurveda (the world's oldest and most complete system of natural medicine), who now develops corporate health programs; Robert Keith Wallace, PhD (UCLA doctorate in Physiology), whose ground-breaking early research, published in Science and Scientific American, and the American Journal of Physiology.