Murder Most Foul! The Conspiracy That Murdered President Kennedy: Edited with an Introduction by Rob Couteau (Paperback) 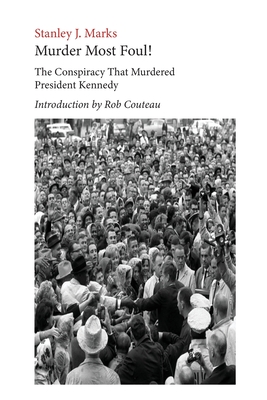 This volume features two books in one: Stanley J. Marks' Murder Most Foul and Rob Couteau's biographical essay that surveys the life and work of this author of a forgotten classic. It also includes an in-depth examination of Murder Most Foul that shows how and why it was so far ahead of its time and that places it in the context of other researchers, past and present. Couteau shares his detective work in unraveling the clues of Marks' Zelig-like biography, which touches on so many pivotal moments in 20th-century cultural and political history. This groundbreaking biography was also produced with the help of Marks' only child, Roberta Marks. JFK scholar Jim DiEugenio calls Couteau's work "important," "first-rate," and "a wonderful homage" to "one of the most important critics of the Warren Report ever ... and an unsung hero in the JFK case. Stanley Marks was rocket miles ahead of everyone. He really understood the big picture early. And not just on the JFK case." DiEugenio is the foremost scholar on the Kennedy assassination, author of Destiny Betrayed: JFK, Cuba, and the Garrison Case, and scriptwriter for Oliver Stone's documentary, JFK: Destiny Betrayed (2020). With the release of Bob Dylan's ballad, "Murder Most Foul," which may have been influenced by Marks' book, interest in the author has been reawakened, largely as a result of Couteau's first article on Marks. More than fifty years after the publication of Murder Most Foul the text still resonates with a prescient vision. A fearless author who was blacklisted by HUAC, Marks was one of the first American researchers to draw a direct connection between the murders of JFK, MLK, and RFK. In 1973, the JFK Library contacted Marks with a request to purchase Murder Most Foul In 1979, the House of Representatives Select Subcommittee on Assassinations cited five of Marks' assassination-related titles (including Murder Most Foul ) in its report. Marks published nineteen books on politics and religion, one of which received accolades from Arnold Toynbee and Herbert Marcuse. His first book, a bestseller titled The Bear that Walks Like a Man A Diplomatic and Military Analysis of Soviet Russia (1943), was reviewed in over thirty mainstream newspapers.